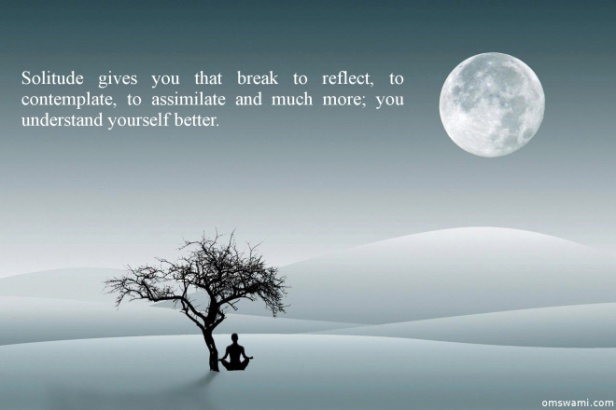 Below follow some quotes on solitude for your consideration.

“Loneliness is the poverty of self; solitude is the richness of self.”
– May Sarton

“Solitude is a place of purification.”
– Martin Buber

“The Monotony & Solitude of a quiet life stimulates the creative mind.”
– Albert Einstein

“It is easy in the world to live after the world’s opinion; it is easy in solitude to live after our own; but the great man is he who in the midst of the crowd keeps with perfect sweetness the independence of solitude.”
– Ralph Waldo Emerson, The Complete Prose Works

“A poet is a nightingale, who sits in darkness and sings to cheer its own solitude with sweet sounds.”
– Percy Bysshe Shelley

“We talk of communing with Nature, but ‘tis with ourselves we commune…Nature furnishes the conditions – the solitude – and the soul furnishes the entertainment.”
– John Burroughs

“To give thanks in solitude is enough. Thanksgiving has wings and goes where it must go. Your prayer knows much more about it than you do.”
– Victor Hugo

“The more powerful and original a mind, the more it will incline towards the religion of solitude.”
– Aldous Huxley

“Conversation enriches the understanding, but solitude is the school of genius.”
– Edward Gibbon

“Alone let him constantly meditate in solitude on that which is salutary for his soul, for he who meditates in solitude attains supreme bliss.”
– Guru Nanak

“Then stirs the feeling infinite so felt in solitude, where we are least alone.”
– Lord Byron

“Solitude us strength; to depend on the presence of the crowd is weakness. The man who needs a mob to nerve him is much more alone than he imagines.”
– Paul Brunton

“I had three chairs in my house; one for solitude, two for friendship, three for society.”
– Henry David Thoreau

“One of the greatest necessities in America is to discover creative solitude.”
– Carl Sandburg

“Solitude is creativity’s best friend, and solitude is refreshment for our souls.”
– Naomi Judd

“Someone who’s awake in the middle of the night is a soul consciousness when everyone else is asleep, and that creates a feeling of solitude in poetry that I very much like.”
– Edward Hirsch

One thought on “#Quotes On #Solitude”

Book Review: The Field – The Quest For The Secret Force of the Universe by Lynne McTaggart | #Consciousness #QuantumBiology #QuantumPhysics #TheField #Epigenetics

How Many of Your Individual Actions Do You Control With Your Conscious Mind?

To Trump aides: you have no idea how deep the CDC scandals go

Book Review: The Contagion Myth: Why Viruses (including “Coronavirus”) Are Not the Cause of Disease | #COVID-19

Tom Campbell and Bruce Lipton: Two Scientists “See the Same World” In How They See Consciousness