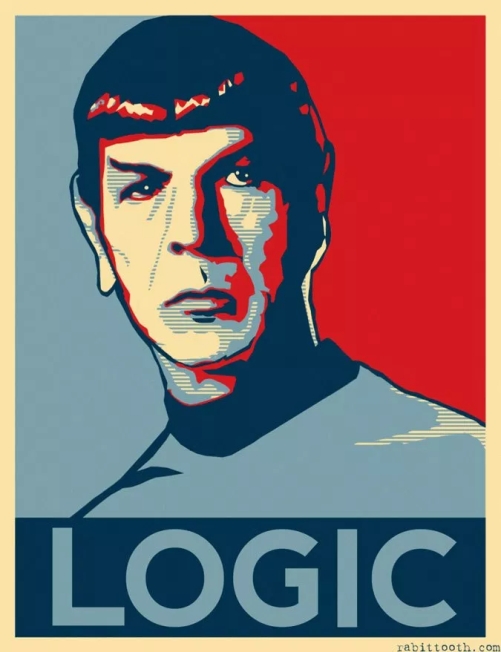 Logic is an amazing tool.  In fact, so much so, that those that do not employ it do not see what others may see or find as obvious.

By way of example, I will give examples that venture into two of my favorite things in life: gaming and poker.

While in my teens, I used to play a Real-Time-Strategy game called Starcraft.  The goal of the game was to beat you opponent’s army with your own.  Starcraft could be played by yourself, or online.  I myself chose to play it online because I could play it with and against other people, whether individually or teams, instead of playing against simply against the Artificial Intelligence that the ‘computer’ generated, which at that time was strong, but not stronger than individuals.

Often times, while playing online, opponents would accuse me of hacking.  This took place the majority of the time because my forces were (1) right where they needed to be, and (2) the speed at which I built was faster-than-usual (although not unnatural).  Opponents couldn’t imagine someone not hacking and accomplishing those two.

In the first example above, instincts (coupled with experience) will go a long way into ascertaining what your opponents would do, although never 100% probability in the long run.  This is why logic was and is vital.  For instance, if there are three avenues of approach to your base, and you have verified that your opponent is not at the other two, then its logical to infer that he must be taking that third route, without having to check the third road.   Now we will take apart the second example revolving around building orders.

Within the second example, all it would take for an individual was to come up with a logically-based-building order in order to figure out how to acquire whatever unit, or resource you needed to acquire, and do so in rapid fashion.  The more logical your building order, the easier it was to accomplish your goal.  Just like paper cannot be made without trees, within Starcraft, specialized units could not be made without certain structures.  Those that  got them quickest had an incredible advantage that allowed you to essentially crush your opponent when they couldn’t see you coming (in this case literally, since you were employing cloaking technology that was part of a unit called a Ghost and its repertoire.)  Players that didn’t employ building orders, nor logic, could not see what could be accomplished by discipline, practice, trial-and-error and precision of thought within the game.

Are the above examples simple?  Yes, but they prove the point.  The Poker example will follow in a second.  Keep in mind that although, logic is like a laser, and highly helpful, it can be detrimental if used in a flawed manner.

There are two basic types of reasoning which are (1) inductive and (2) deductive.   Inductive reasoning yields probability, while deductive reasoning yields certainty.  In the above example of the three roads heading into my base, two of which were reconnoitered, it was certain that the attack would come from the third.  That’s certainty.  Now, if my base contained 10 avenues of approach, and I had ran scans via the satellites of 8 of those roads, and still 2 remained unscanned, this would mean that I could not be 100% certain which road my opponent would come through, but it was highly probable that it had to be one or the other.

While Starcraft featured one example in certainty and one in probability, the next example will strictly deal with probability.  As a preamble to this next part, let’s take a look at a scene from the classic Poker move named Rounders, which actually inspired me to seek out the game as such:

What do we have?  We have a player that was able to analyze the cards of other players and be correct.  This example is incredibly extreme though, though certainly possible.  Knowing exactly what that many opponents have as the example above, while not impossible, is highly unlikely.  Knowing what a handful of opponents have is certainly possible.  The point is however, that by employing a variety of (mental) poker tools, an individual can narrow down the hand ranges of the individuals, so much so that they will oft-know what they have, but never to 100% accuracy.  Of course, this lack of certainty implies probability.

Poker is a fascinating game because, although the example I speak of only deals with probability, inductive and deductive reasoning can play a vital role in the construction of a hand analysis.  The more robust your ability to analyze hands on the fly, the easier it is going to be too narrow your opponents hand range (or even particular hand in rare instances) as in the movie clip above and the better prepared you will be while playing, thus knowing when to hold’em, and when to fold’em.

By knowing your opponents tendencies, knowing hand ranges, what those hand ranges will do on a bet-by-bet, or street by street bases, by picking up betting patterns (if they exist), by using deductive and inductive reasoning and also by employing poker combinatorics, individuals will be much better prepared to know what particular range of hand an opponent has, or even the actual hand; this all deals with probability.  Those are not the only tools a player may employ, simply the ones I am mentioning not to overcomplicate this example.

The more robust and capable you are at such, the easier it is going to be to ‘read your opponent’ in such a way that it is obvious to you, but not others.  This has left others accuse me of hacking and/or cheating in online games because they can’t fathom someone’s handreading ability to be as such.  And many people are capable of this.  That said, the baseless accusations employed in these two games evaporate quickly once realizes that there are simple explanations.  Of course, I’m not the only player to have gone through this, many others have as well.

The point is that people that do not employ logic or imagination can at times accuse others that do employ logic and imagination in an acute way of doing things that did not take place, simply because they are missing out on the finer details.  And that’s what life is, details.

Details are everywhere.  Life, if nothing else, is composed of little things, salient details.  They all tell a story.  Those that pay attention to those details and know what they signify (or are likely too), are not magicians of any sort, hackers, or cheaters; these individuals are just seeing things for what they are when employing certainty, or what they are likely to be when employing high probability.

This is why I am constantly urging others to study Logic, so they can realize what it can do, and what it cannot.  Everyone that studies it and employs it regularly is better off for myriad reasons, not the least of which is just seeing things in the totality of their existence, seeing an Ace for an Ace, or seeing a circumstance for a circumstance.

As such, Logic is the missing link.  Not employing logic to its maximum potential is akin to an astronomer without a telescope.  Just because an astronomer can visually see the sky does not mean that they are able to see its full breadth and scope.  Logic allows for the exploration required to see the boundlessness of life.

In life, no matter what journey you choose to make, getting to your destination is always going to be easier with logic.

Logical Fallacies Employed In Every Day Life
13 Great Reasons To Study Logic
Socratic Logic by Peter Kreeft Ph.D.
Philosophy 101 by Peter Kreeft Ph.D.
How To Read A Book by Mortimer J. Adler and Charles Van Doren
Getting Things Done by David Allen
The Trivium – The Liberal Arts Of Logic, Grammar & Rhetoric by Sister Miriam Joseph Ph.D.
A Rulebook For Arguments by Anthony Weston
A Workbook For Arguments by David R. Morrow & Anthony Wesson

Book Review: The Field – The Quest For The Secret Force of the Universe by Lynne McTaggart | #Consciousness #QuantumBiology #QuantumPhysics #TheField #Epigenetics

How Many of Your Individual Actions Do You Control With Your Conscious Mind?

To Trump aides: you have no idea how deep the CDC scandals go

Book Review: The Contagion Myth: Why Viruses (including “Coronavirus”) Are Not the Cause of Disease | #COVID-19

Tom Campbell and Bruce Lipton: Two Scientists “See the Same World” In How They See Consciousness