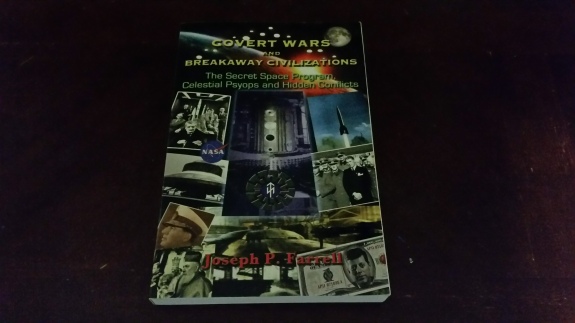 Of the many great books Dr. Joseph P. Farrell has published, this one is one of my favorites.

Constantly, for many years now he has been putting out high quality information, and this book is no different.

Covert Wars And Breakaway Civilizations – The Secret Space Program, Celestial Psyops & Hidden Conflicts by Dr. Joseph P. Farrell, is a mind bending expedition not only into the abstruse facets/subjects that have helped mold our society, but also showcasing how these components are being used to carve out a different reality – a more sinister one. Along with that is arguably at least one collectively powerful Breakway Civilization that’s breaking away.

Getting back on track, Farrell lays the foundation of this book by covering the financial nexus that has fueled much of the malice that we have seen within the financial sector, and which has naturally dovetailed into other arenas as well.

Economic warfare is a topic that doesn’t get enough light by mainstream, and even alternative media circles to some extent. However, the modern derivative [no pun intended] of financial warfare has some of its nascent stages within the earlier parts of the 20th Century. A prime example of this is Operation Bernhard. This type of operation was the brainchild of the Nazi’s during WWII, and its main purpose was to “destabilise the British economy via economic warfare by flooding the global and British Empire with Forged Bank of England”[1]

This sophisticated method of economic warfare of using British pound notes was rather trenchant not only because it took part in an industrial scale, as Farrell mentions, but also because as is mentioned by the author, “They were, in effect, to be British pound notes”.[2]In essence, they were perfect facsimiles – perfect copies.  This prompted the British to remove all similar notes in circulation there in.

That’s the type of forgeries that were being carried out by the Nazis. Why is this important? Because, as alluded to earlier, this helped lay the financial foundation for what would become the Nazi War Machine

Moving on, coupled with the financial component that is Operation Bernhard, Farrell moves forward to a more modern operation that involves the recent Bearer Bond Scandal, as well as how the Vatican dovetails into that as well. The so called “Kennedy Bonds” are touched upon lightly as well. Farrell does a rather thorough analysis of these Bonds within his book, and with a fine-tooth comb picks apart some monumental details that are not so subtle in regards to space.

All of these abstruse yet notable avenues lead towards what Farrell has repeatedly named, a hidden system of finance. This particular system was created in the mid 20th century, and has been arguably used to fund a large majority of the more nefarious technological programs that take place behind the scenes as it were.

In a way, all of these topics merge with the topic of bulk data collection. And on this topic, Farrell postulates that the PROMIS system, which is related to the Inslaw affair, is a profound technology used to carry this type of bulk spying. Why is this important? Because as Farrell alludes in his book:

“According to Seymour, Inslaw founder Bill Hamilton had come to his own research conclusions. He believed “…after more than two decades of research, that the modified version of his PROMIS software had been used for money laundering of drug profits to fund unauthorized intelligence operations…” Indeed, such a powerful program would not only allow the tracking of covert financial activities, and even for the existence of an entire covert financial system, but it would also allow something equally important for such a system to exist, namely, the ability to cover its tracks and obfuscate its activities by using the “backdoor” to modify the actual numbers of transactions…say, for example, the amounts of gold actually in existence. Such a tool would allow the same amount of gold to be used as the backing or collateral to float securities over and over different issues.” [3][Bold Emphasis Added]

As if that’s not enough, the PROMIS system has darker components, but for that, you will have to read Farrell’s book.

The gold alluded to the passage cited above, is the main component in Operation Golden Lily. Farrell tackles how Operation Golden Lily, as well as the Bearer Bonds, were used in the establishment of the hidden system of finance spoken about already. As the author has mentioned countless times, the amount of Gold in circulation, by any and all precise forms of analysis, is not capable of being narrowed down and homed in on.

There is no unquestionable verifiable source that one can cite as conclusive in respect to the amount of Gold in circulation in the system. Different researchers will give readers different estimates of these amounts, and as Farrell has alluded to, this is done on purpose, to obfuscate the real amount of Gold in circulation. This is because, as Farrell estimates, the amount of Gold in circulation might be off by an order of magnitude. A preposterous hypothesis to some perhaps, but, when taken in conjunction with all the data provided by Farrell, as well as the monumental work of Sterling and Peggy Seagrave in Gold Warriors, and other researchers as well, one begins to see a larger picture that has been clearly veiled over for very nefarious reasons.   Some of these reasons are honed in on by Farrell in this book and in his interviews regarding this subject.

Other subjects that dovetail disturbingly quite well into this book are 9/11 targets, the Bush family, and many other parts of this orchestrated event . The components of 9/11 that Farrell harpoons on are oft-overlooked sections by most 9/11 researchers, but ones that have rather resounding effects into what is still taking place to this day.

Farrell’s theory as to why the covert operation that was 9/11 was undertaken is spoken about, and it’s something that no other researcher out there has even touched, nor come close too in my estimation. The author’s hypothesis, when all the data presented is taken into consideration, is arguably incredibly strong.  This can be noted by the capabilities of the orchestrators of the attack, as well as what they stood to lose by a possible exposure of their hidden financial capacities if such attack did not take place.

One particular subject that has far reaching implications is the weaponization of planet earth. Regarding this, Farrell covers not only the technologies of Geophysical Warfare, but also how this couples rather disturbingly with Kardashev’s Class Of Civilizations theory.  Regarding Geophysical Warfare, Farrell looks through various lenses, and even hones in on an Air Force study called Weather As A Force Multiplier: Owning The Weather In 2025.

Such power gives those in control, as writer of Weather Farfare: The Military’s Plan To Draft Mother Nature, Jerry Smith states, the ability to undertake “war covertly by causing droughts, storms, volcanic eruptions and floods” and thus raising the question “how would the general public know if such war were being fought?”[4][Bold Emphasis Added]

Farrell even takes a gander at some of Charles L. Chandler’s work in respect to the possible electromagnetic nature of tornadoes. This component was definitely unexpected but very fascinating.

Given the highly advanced technological dissertation in the book, of course, no work would be complete without at least taking a gander at Nikola Tesla’s work. Here, Farrell follows how Tesla’s work dovetailed with geophysical weapons, and then some. From there, not only does the author carry out some detailed analysis in a few directions, but he also gives some of the powerful implications that are set forth from there.   This chapter alone will blow a hole in most people’s conventional views of Earthquakes, and many other ‘natural’ phenomena.

Dozens of pages, if not more, could be written about Farrell’s coverage, and the disturbing implications of all that he covers. That still wouldn’t be enough, because there are so many components that merge into what’s been called “Full Spectrum Dominance” that it boggles the mind of those which know not of what’s taking place.

Farrell also buttresses his book with a thorough view into the “Airship Mystery” of the 19th and early 20th century. This is quite notable, for within these observations one can see how the nascent stages – the schematics – of a Breakaway Civilization were developed.

Another oft-overlooked, but quite important issue that is covered is that of UFOs and Nuclear Weapons. Countless events have taken place in which UFOs have shown their capability to activate nuclear missiles. Yes, you read that right. This has been covered by many researches, most notably Robert Hastings covers it incisively in his books UFOs And Nukes: Extraordinary Encounters At Nuclear Weapon Sites. Farrell covers this aspect, as having the most powerful weapons [within the public realm] be able to be toyed with, by others – whomever they may be, be them humans from earth or those from out there – shows capacity that’s oft-covered up by the mainstream.  Declassified documents are how this esoteric part of UFOs is known.

Given the powers that those piloting the UFOs were showcasing, as Farrell notes, “The technological capability of the UFO presented a direct challenge to the aura of “full spectrum dominance’ being evolved by the elite during the postwar period, and hence, the UFO presence could not be openly acknowledged, at least, that is, until some technological parity had been achieved.”[5][Bold Emphasis Added]

In all honesty, all of what Farrell covers is very intriguing, but not without its darker implications. If any of what has been mentioned fascinates you, get this book. You will not regret it.

Most people think we live in a word where the impossible can’t take place; where reality is by most measures boring. Nothing could be further from the truth.

Not only does this book show how much of what people would call Science Fiction does take place, but lays the foundation to view modern, and future warfare in a different light.

Humanity has walked through a dangerous door, in which warfare is not only waged via economic means, but also via propaganda, social engineering, entrainment technology, weaponized foods, GeoEngineering and so on. Coupled with that are non-linear weapons being used, in which one country creates a storm, while the other can reply with a hurricane, and the next can use an Earthquake, and even possibly tsunamis as well.

The technology is there, whether they it is used or not.  That’s just the tip of the iceberg.   And the thing is, most of the populace is blind to it because they think its always “Mother Nature” pulling the strings. Only if it were that simple.

If you’re still skeptical, why not take a gander at, as was mentioned earlier, the Air Force study called Weather As A Force Multiplier: Owning The Weather In 2025. That alone will blow most people’s mind into what the Airforce was planning to accomplish. That’s in the public record as well.  Whatever considerations are thought out in private will never be known to the public unless serious leaks take place.

If you’re looking for more info, as well, make sure to take a gander at Farrell’s first book in this series:

This entire trilogy will allow you to view the world in a whole new lense, and realize that history is not what we’re being taught. History is about what lies in the shadows. And we can only see that, if light is cast upon it. This book sheds plenty of light in those direction where darkness has seeped into.

There are countless other topics that are covered, and for that, you’ll have to read this book.