“I formd them free, and free they must remain.”

“The mind is its own place, and in it self
Can make a Heav’n of Hell, a Hell of Heav’n.”

“A mind not to be chang’d by Place or Time.” 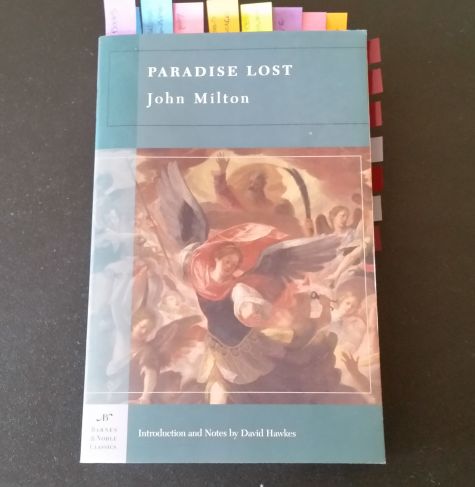 Paradise Lost by John Milton, is a 17th century epic poem that was published in 1667 cataloging the classic biblical story of Adam and Eve, and the fall of man.

In no uncertain terms, Milton’s magnum opus is a veritable landmark within the chronicles of humanity’s literary past, and was written when Milton was nigh 60 years old, showing one is never too late to chase a dream, or even create a masterpiece.  Sixty-years old!  I was shocked as well to put it lightly.

Paradise Lost starkly shows that Milton’s imagination was as boundless as it was incisive, and he paints a masterful world in which good and evil battle for the fate of the world.

The wondrously wicked world Milton inks is as macabre as it is delightful; it is as inspiring as it is demoralizing; it is as boundless as it is confining, and yet it is absolutely perfect because it is an unrelenting masterpiece of emotional range, yet alone the open-mindedness that an individual’s consciousness can showcase in the voyage to gloriously weave a gem whose spirit follows that of the very definition of the word epic.

It countless ways, Paradise Lost takes the reader through a kaleidoscope of emotions in a way I have never seen any poem ever do, and does it with literary precision that’s laudable to the highest extent, and that’s not a hyperbole either.

Undoubtedly one of the best epics of all-time, Paradise Lost features a plethora of allusions which not only show Milton’s talent as a writer, but more so, the intellectual character of the man as well as his religious devotion.

Milton’s constant inferences to theological and classical underpinnings of society at the time are one of the greatest components of this masterpiece.  Every line is incisively thought out, and weaves so effortlessly that’s as thought-provoking as it is deep.

To be fair, the diction used in Milton’s time might be something that could turn certain readers off, but the notations at the bottom of each page of this particular version help the reader traverse through this fascinating and fierce fictional world that Milton crafted rather seamlessly.

Admittedly, an epic like this will demand a lot from the reader, and rightly so.  As a quintessential milestone in history, Paradise Lost is written with orders of magnitude more depth than most books ever have been.

Given the complex range of characters it employs, such as Adam, Eve, Satan, God, Michael, etc., and the philosophical underpinnings of what many of humanity’s deeper yearnings and concerns are, Paradise Lost also does an exemplary job of showing the age old battle of Good vs. Evil in a thoroughly refreshing way.  Plain and simple, it’s breathtaking originality coupled with its depth and range is not something one finds except in books like, The Odyssey, The Iliad, or even The Divine Comedy.

That is why all of those previous books would easily qualify under what Mortimer J. Adler and Charles Van Doren argued in How To Read A Book, were the greatest books of all time, of which they averred there were 1% of the books out there, if not much less.

The authors of How to Read A Book boldly declared that:

“…if the book belongs to the highest class – the very small number of inexhaustible books – you discover on returning that the book seems to have grown with you.  You see new things in it – whole new sets of new things – that you did not see before.  Your previous understanding of the book is not invalidated; it is just as true as it ever was, and in the same ways that it was true before.  But now it is true in still other ways, too.”[1]

If a truly timeless poem that weaves an epic battle for the fate of the world, seamlessly interwoven with strands of good an evil tugging at each other through the entire spectrum of life, battling it out in sundering scenes worthy of the very intensity of any of the best modern movies, that comes about simply through the written word, featuring the best and worst of life through the material and spiritual spectrum, all firmly cemented on solid philosophical grounds worthy of endless contemplation, that easily rivals some of the best books, yet alone poems, doesn’t qualify as one of the best books ever, I’m not sure what does.

When ruminating upon its breadth, scope and complexity, it’s a pity that more works aren’t as well thought out as this.  The standards Milton set upon himself to accomplish this piece should be held in high respect, for it is a testament to what human creativity can achieve (especially at the age Milton did!) when it sets its mind to it.  And that, my friends, is priceless, just like Paradise Lost.

The Hobbit by J.R.R. Tolkien

Lord Of The Rings by J.R.R. Tolkien

The Philosophy Of Tolkien – The Worldview Behind Lord Of The Rings by Peter Kreeft Ph.D.

On The Shoulders Of Hobbits – The Road To Virtue By Tolkien & Lewis by Louis Marko Ph.D.

Lord Of The Rings: How To Read J.R.R. Tolkien [Presentation]

The Vision Of Freedom That Tolkien Got & The West Forgot [Video]

The Divine Comedy by Dante Alighieri