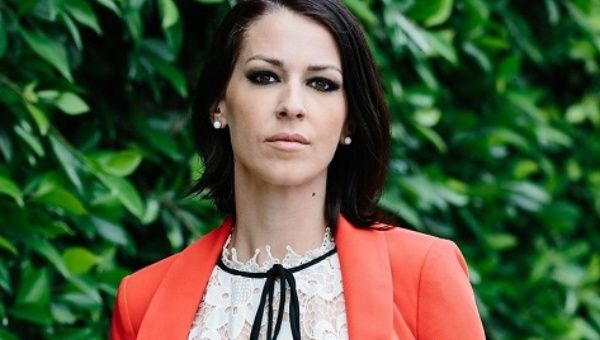 “We must stand firmly opposed to these efforts and not cower in fear to these blatant violations of free speech,” the journalist and filmmaker said.

Former teleSUR presenter and creator of The Empire Files Abby Martin is suing the U.S. state of Georgia which blocked her participation last month at a media conference at Georgia Southern University because she refused to “sign a contractual pledge to not boycott Israel” to comply with an anti-Boycott, Divest and Sanctions (BDS) law.

“This censorship of my talk based on forced compliance to anti-BDS laws in Georgia is just one level of a nationwide campaign to protect Israel from grassroots pressure,” the journalist and filmmaker said.

“We must stand firmly opposed to these efforts and not cower in fear to these blatant violations of free speech.”

Together with the Council on American-Islamic Relations (CAIR) and the Partnership for Civil Justice Fund (PCJF), Martin filed Monday a federal free-speech lawsuit against the University System of Georgia, for the “unconstitutionality” of its decision.

“By canceling a journalist’s speaking engagement on a college campus because she refused to pledge support for a foreign government, the State of Georgia has blatantly violated the First Amendment’s guarantee of freedom of speech,” CAIR-Georgia Executive Director Edward Ahmed Mitchell said.

Former Governor of Georgia Nathan Deal signed in 2016 a law requiring any person or company that enters into a contract with the State of Georgia worth US$1,000 or more to pledge not to engage in political boycotts of the Israeli government based on its treatment of Palestinians.

Numerous advocacy groups and state lawmakers disapproved of the law as a violation of free speech.

Since 2014, 28 states have adopted such laws, including five executive orders issued by governors.

As the nationwide crackdown on BDS continues, President Donald Trump signed an executive order on Dec. 11 that will effectively allow the government to interpret Judaism as both a race or nationality and religion under federal law so that the Education Department can take direct action against what he views as “anti-Semitism on college campuses.”

Trump stated clearly that the decision targets the Boycott, Divestment and Sanctions movement (BDS) calling it an “anti-Semitic campaign against Israel.”

The order will trigger Title VI of the Civil Rights Act of 1964 that requires educational institutions receiving federal funding to not discriminate based on national origin; meaning the government can now withhold federal funding from any college or educational program that is deemed to allow or endorse “anti-Semitism.”

“There is no place where free speech is more important than on campus. And this attempt to suppress Abby’s views – denying students, academics, and others from hearing her lecture – is as brazen as it is illegal,” CAIR Legal Defense Fund Senior Litigation Attorney Gadeir Abbas said.

“In adopting this anti-BDS law, Georgia has prioritized the policy preferences of a foreign country over the free speech rights of Americans, like Abby, who speak on this state’s college campuses.”

BDS has gained notoriety in college campuses across the U.S. with more people understanding and backing the Palestinian struggle.

The non-violent movement was founded in 2005 by 170 Palestinian unions, political parties, refugee networks, and women organizations, among others. It has since gained such renown that it was nominated for the Nobel Peace Prize.

Inspired by South Africa’s anti-apartheid movement, BDS calls for non-violent pressure on Israel through boycotting any organization linked to the state of Israel, withdrawing investment from Israeli companies, and sanctioning the county until Israel recognizes the right of Palestinian refugees to return, ends the illegal military occupation of Palestine, and ends the apartheid regime by recognizing Palestinian’s equal rights and stops human rights abuses.