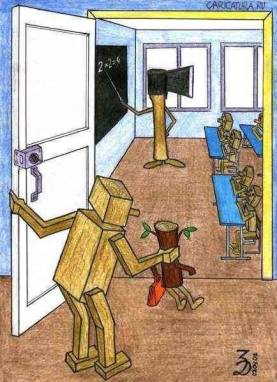 Continuing on our series in which we are taking an increasingly widening glance into the true nature of public schooling, what follows will be a snippet of the information covered in Dumbing Us Down – The Hidden Curriculum of Compulsory Schooling by John Taylor Gatto.

The late Gatto has come out speaking at length about many of the pervasive and troubling issues that young [and future] generations have to contend with, and the information which proceeds will shed light into how this has come to be.

Within the curriculum of public schooling, Gatto states the following lessons are “universally taught from Harlem to Hollywood Hills.  They constitute a national curriculum you pay for in more ways than you can imagine, so you might as well know what it is.”[1]

Gatto, in his own words states public schooling teaches:

Throughout his books, Gatto has touched upon how confusion is programmed into the minds of the young – thorough the fragmentation of education.  This fragmenting of education and teaching things out of context is what’s responsible for the inculcation of what is unnatural to the mind, which only cover superficial narratives and nigh never anything of substance.

School doesn’t teach things that are in perfect harmony with each other – a natural order.  This issue prevents kids, who turn into adults, from connecting the dots, from synthesizing information.  And this goes to explain how people cannot understand how issues such as Genetically Modified Foods [that continue to be banned in dozens of countries] could ever be connected with health issues.  That’s just the beginning, though.

Class position leads to an acquiescence to conformity ideals, even though in life people of all ages, types, creeds and religions connect and interact with people from all over the spectrum.  There’s no hindering structure of conformity anywhere in nature.  This takes place only in public schooling and sections of society.

“If I do my job well, the kids can’t even imagine themselves somewhere else because I’ve shown them how to envy and fear the better classes and how to have contempt for the dumb classes.  Under this efficient discipline the class mostly polices itself into good marching order.  That’s the real lesson of any rigged competition like school.  You come to know your place.”[4][Bold Emphasis Added]

And then people wonder where the seeds of division are sewn.    If that were it, that would be bad enough, but school also teaches…

This is accomplished by the way subjects are taught by mere cursory glances instead of an in depth approach.  This further pulverizes possible education into fragments of disciplines and knowledge, rather than building a robust set of ideas that can help the individual connect dots see what matters.  As Gatto notes:

“…[students] must turn own and off like a light switch.  Nothing important is finished in class nor in any class I know of.  Students never have a complete experience except on the installment plan.”[6]

When you only experience slivers of knowledge, how can complete pictures of life ever be grasped?  How can one come to a meaningful understanding to the depth that life harbors?  One cannot.  Such instances lead to nothing of importance ever being learned, which of course naturally leads to the pervasive indifference part of society has been indoctrinated with.

“Rights may be granted or withheld by any authority without appeal, because rights do not exist inside a school – not even the right to free speech, as the Supreme Court has ruled – unless school authorities say they do.”[8]

If children can depend on themselves, who can they ‘depend’ on?  The high priests of public schooling, predictably.

This issue is best encapsulated by the following statement:

“Good students wait for a teacher to tell them what to do.  This is the most important lesson of them all; we must wait for other people, better trained than ourselves, to make the meanings of our lives.  The expert makes all the important choices; Only I, the teacher, can determine what my kids must study, or rather, only the people who pay me can make those decisions, which I then reinforce.”[10]

This couples into mindless consumption, which the system is build upon.  Gatto minces no words:

“It is hardly an exaggeration to say that the entire economy depends upon this lesson being learned.”[11][Bold Emphasis Added].

What else could one expect when dependency is taught at the outset, and people learn to are indoctrinated to seek experts and not think for themselves?

“We’ve build a way of life that depends on people doing what they are told because they don’t know how to tell themselves what to do.  It’s one of the biggest lessons I teach.”[12]

“A monthly report, impressive in its provision, is sent into a student’s home to elicit approval or mark exactly, down to a single percentage point, how dissatisfied with the child a parent should be.  The ecology of “Good” schooling depends on perpetuating dissatisfaction, just as the commercial economy depends on the same fertilizer…the cumulative weight of these objective-seeming documents establishes a profile that compels children to arrive at certain decisions about themselves and their future based on the casual judgment of strangers.   Self-evaluation, the staple of every major philosophical system that ever appeared on the planet, is never considered a factor.  The lesson of report cards, grades, and tests is that children should not trust themselves or their parents but should instead rely on the evaluation of certified officials.  People need to be told what they are worth.”[14][Emphasis Added Throughout].

Unfortunately, much of society echoes this without a second thought down to the letter.

In school children are taught that there is no privacy, and you are under constant surveillance.  Personal independence and self sufficiency have no place in school.

“I teach students that they are always watched, that each is under constant surveillance by me and my colleagues.  There are no private spaces for children; there is no private time…Students are encouraged to tattle on each other or even to tattle on their parents.  Of course, I encourage parents to file reports about their child’s waywardness too.”[16]

“The meaning of constant surveillance and denial of privacy is that no one can be trusted, that privacy is not legitimate.”[17]

Once pondered, the above statements reverberate deep into the psyche.  Such are the seeds from which much of the pervasive issues society is dealing with stem from.  The lack of respect for privacy, dependence on the government, materialism, empty concept of the future, lack of critical skills, the conformity crisis, class distinction, and more, all have the inception within the nascent stages of public schooling.

This coalescence of societal issues cannot change unless that which holds the foundation – public schooling – changes.  And Public Schooling has never shown any meaningful changes coming from the inside, which is why individuals need to learn to become self-directed learners and autodidacts in order to be better prepared for the world that we live in.

The world that we live in has much more to offer than what we are taught it does.  Even so, a limited understanding off an individual’s ability will only yield a limited point of view in life, like seeing life with perpetual tunnel vision.

Only by breaking away from that marginalized reality will the individual see life for what it is, and only by asserting your power will you be able to control your path.

Then and only then can true unbounded freedom and education be had.