#Quote Of The Day | Today | Now | The Moment | #Mindfulness #RalphWaldoEmerson

What Is The Difference Between Education & Public Schooling? | #Education

Drugs, the Illegality of Healing and Pharmageddon 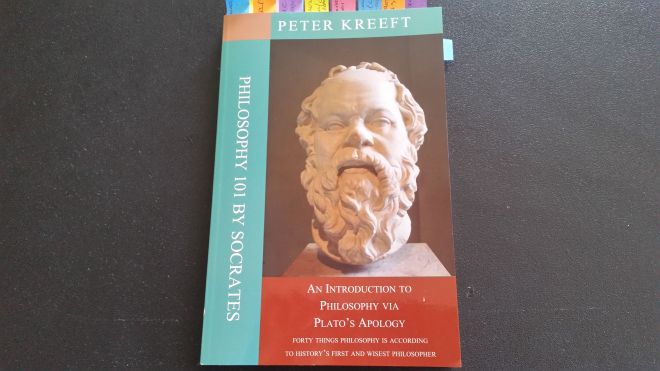 My introduction to Peter Kreeft’s work took place via his magnum opus Socratic Logic – A Logic Text Using Socratic Method, Platonic Questions, And Aristotelian Principles Edition 3.1.  With that book, Kreeft set the bar extremely high for his own work given the phenomenal job he did in the execution and importance of that book.

Philosophy 101 By Socrates – An Introduction To Plato’s Apology though not as large in scope, is still a seminal job in introducing individuals to philosophy.  In essence, what Kreeft creates is what one may call a ‘user-friendly’ guide to Philosophy.

Philosophy 101 by Socrates is distilled to serve as a very pragmatic introduction for individuals to venture forth into many philosophical subjects from a kaleidoscope of angles.  Additionally, not only is it possible to use this book as a portable classroom given the pragmatic way that it is structured, but it can be useful for homeschooling and even college classrooms.

Now, you might be asking yourself, “Why is Philosophy even important?”  Excellent question.   The reason Philosophy is important is because as Kreeft himself argues, Philosophy takes no prisoners.  Philosophy questions everything.  Like a curious kid asking ‘why’ in their nascent stages, Philosophy seeks truth – not belief – within every crevice it dares to delve into.

Kreeft shows how Socrates’ philosophy operates in the following passage:

“Socrates is the apostle of reason.  He demands that we give logical reasons, grounds for beliefs, and follow the logical consequences of our beliefs, taken as premises or hypotheses, to their logical conclusions through a number of logically compelling steps.”[1]

Such incisiveness will undoubtedly get to the core of the issue far more often than not if employed correctly.

And yet, as Kreeft implies, philosophy isn’t an antithesis to certain disciplines, such as religion.  In fact, Kreeft goes to show how faith and reason can coexist if used trenchantly:

“One of the main functions of philosophy as practiced by Socrates is a critique of religion, finding reasons for (or against) faith.  These reasons often claim only probability rather than certainty; and even when they claim certainty, they may be mistaken for man is not God and infallible; but it is surely a gain to use binocular vision, reason and faith, and to make at least somewhat clearer and/or more reasonable the ideas most people find the most important in their lives.”[2]

As an introduction to philosophy and Socrates simultaneously, one would be hard-pressed to find a better book than this.  In that, Kreeft does an exceptional job in showing how Philosophy and Socrates interweave, especially given how Socrates planted many of the seeds that helped become the foundation through  his life’s work.

Employing Plato’s Apology as the foundation of the book, Kreeft undertakes the task of showing the many ways philosophy can be understood, by using forty different descriptions of the subject.  It was particularly interesting seeing the range of descriptions that Kreeft was able to come up with and how he was able to seamlessly show how apt those descriptions were to the act of philosophizing and broadening an individual’s understanding of a wide array of subject matter.

Subsequent to that, Kreeft gives readers a cursory analysis of parts of the Euthyphro, as well as Phaedo, which are both dialogues by Plato, the latter of which details Socrates’ last days.  These dialogues help undergird the book with a wider foundation of Philosophy that merge swiftly with the rest of the book.

One of the main strengths of this book is its ability to narrow complex topics into practical – but not overly simplified – gems of information that the reader can learn from easily.  By contrast, many other philosophy books tend to overcomplicate philosophy, which turn readers off, or to oversimplify philosophy, which ends up not showcasing the latitude and incisiveness that philosophy can employ when used effectively.

This practical primer of philosophy also helps readers realize the importance of the art of cross-examination, which Socrates is the father of.  Coupled with that, and more importantly, by the very precise cross-examination techniques Socrates employs in philosophy, Kreeft helps readers gain an understanding of the thorough depth that philosophy will venture to in search for truth and the process that it employs in seeking to achieve that.  Philosophy 101 can only strengthen an individual’s repertoire.

Plain and simple, this book by Kreeft should be an integral component in every single individual’s education.  What the book offers is a template for what’s possible by the application of philosophy in a sound manner, and not having knowledge of these skills in life emblematic of a surgeon at the operating room without a scalpel.

Are You Living Your Dreams?
How TV Robs You Of Your Life
How A Generation Lost Its Common Culture
How To Read A Book by Mortimer J. Adler & Charles Van Doren
Logical Fallacies Employed In Every Day Life
The Minds Of Men [Documentary] | Social Engineering & Mind Control
Manipulation Of Media Messages & Astroturf by Sharyl Attkisson
Mainstream Media Control
Socratic Logic V 3.1 by Peter Kreeft PhD
The Trivium – The Liberal Arts Of Logic, Grammar & Rhetoric by Sister Mary Joseph Ph.D.
Why Read The Classics?
Getting Things done by David Allen
Dumbing Us Down by John Taylor Gatto
The Catastrophic Decline of Public Schooling: 21 Facts Why School Performs Poorly
Mindset Musings#1: Venturing Outside Of Comfort Zones
Rotten To The Common Core by Dr. Joseph P. Farrell & Gary Lawrence
Lesson’s From Orwell’s 1984
Against Public Schooling – How Public Education Cripples Our Kids By John Taylor Gatto
Social Engineering 101
The Tavistock Institute – Social Engineering The Masses By Daniel Estulin
Sherlock Holmes by Arthur Conan Doyle
The Emergence Of Orwellian Newspeak & The Death Of Free Speech
What Is An Elite Curriculum?
A Mind Of Your Own – The Truth About Depression by Dr. Kelly Brogan
Social Engineering 101
Drilling Through The Core by Sandra Stotski & Contributors
What Is An Elite Curriculum?
Invisible Influence by Kevin Hogan